The Grisly Allure of Broken Bones

In the main event of UFC 264, which will likely be the biggest mixed martial arts event of the year, Conor McGregor joined the dubiously exclusive club of UFC fighters who have lost due to horrific leg breaks. Prior to him, only Chris Weidman, Anderson Silva and Corey Hill had done the same.

It was hard to see what happened in real time, but it was much harder to look at what actually happened on any of the innumerable replays — especially for someone who has suffered ankle injuries throughout his life. You may point out that technically he broke his tibia, not his ankle, to which I say it really doesn’t matter; it happened close enough to the ankle to look like an ankle injury, and the psychological damage that has already been done cannot be undone.

Yet there I was, watching every slow-motion replay, cringing and consoling my legs for the psychic damage I was inflicting on them. It reminded me of the Weidman break earlier this year, and how afterward I went back and watched it — and the Silva and Hill leg breaks, too — multiple times. I suppose I had long internalized Bart Simpson’s advice: if you don’t watch the violence, you’ll never get desensitized to it.

I can’t imagine I’m the only one who did that, though; I’m not special or unique enough to be the only one who thinks or does something. The sudden and grotesque physical devastation of a mid-fight leg break is hard to ignore, no matter how much you want to look away. Part of the reason we watch this sport is to see the absolute limits of the human body. This includes seeing it in its most vulnerable and shattered state… 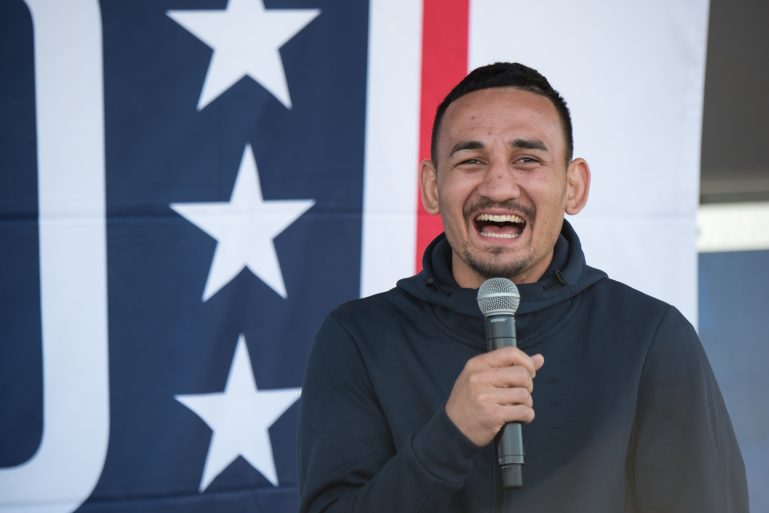 …Holloway is one of the finest fighters in the sport today, and will likely go down as one of the all-time greats when it’s all said and done. Fight fans love him because he’s as exciting as he is excellent, and Hawaii loves him because we love anyone from here who achieves some form of greatness.

Max is special, though. Unlike virtually every other great Hawaii athlete in any sport, he’s never left home. His amateur career and his first four professional fights all took place in local promotions, and throughout his UFC career he’s continued to live and train in Hawaii. His success is a compelling rebuttal to the idea that we need to leave Hawaii to “make it…”

A Motion for Meritocracy

Dustin Poirier at the UFC 257 post-fight press conference explained his status in the Ultimate Fighting Championship’s lightweight division: “I lost to Khabib [Nurmagomedov], then I came out and put on a ‘Fight of the Year’ for you guys and got my hand raised against a Top 5 opponent after that. Then I come in here, Khabib doesn’t want to come back and I knock out one of the biggest fights you can get. Khabib reiterates he doesn’t want to fight anymore. Dude, I’m the champ.”

He has since doubled-down on this assertion, and it’s hard to argue with his point. Since 2017, Poirier has gone 7-1-1 in one of the sport’s toughest divisions. His only loss was against an all-time great in Nurmagomedov, and included in those seven wins are victories over four former UFC champions and a title contender. If Nurmagomedov is in fact done—and it looks like he is—Poirier has done more than anyone to lay claim to the division…

The first time a Hawaiian fighter fought in the Ultimate Fighting Championship in Abu Dhabi, United Arab Emirates, was at UFC 112 in 2010. Maui native and “The Ultimate Fighter” Season 3 winner Kendall Grove kicked off the main card with a second-round technical knockout loss to Mark Munoz. Three fights later, Frankie Edgar claimed the lightweight title in a controversial unanimous decision win over B.J. Penn, the defending champ from Hawaii. The Aloha State went 0-2 for the night.

Over a decade later, it felt as if history repeated itself in the worst way. At UFC 251 on Fight Island in July, Martin Day extended the Abu Dhabi losing streak to Oahu when he got knocked out by Davey Grant in the third round of the first fight on the card. In the same card’s co-main event, Max Holloway was on the wrong end of a split decision against Alexander Volkonovski. The eerie similarities between Hawaii’s two greatest fighters losing belts they should have won a decade apart did not have much time to gestate, as Calvin Kattar beat Dan Ige four days later. Prior to UFC on ABC 1, Hawaiian fighters were 0-5 all-time in Abu Dhabi. A rational fan would look at those five fights and point to the fact that Penn was the only Hawaiian fighter who was a favorite in his bout, but a true fan would understand that a curse was afoot. Everyone becomes a little superstitious when a pattern holds long enough.

By the time Punahele Soriano stepped into the Octagon at UFC on ABC 1, discussion of whether or not there was ever a curse was moot…