Casualties of the UFC’s Quest for Legitimacy

“If you missed UFC Fight Night 130 on Sunday, you didn’t miss much. There were 11 fights of little memorable action and even less divisional relevance. The only fight that did have potential to shake up things — the main event — was a glorified staring contest that was marred by a botched weight cut and even more botched scorecards.

Despite airing a day later than usual and the added regional flavor of Liverpool, England, the card fell flatly into the larger pile of generic combat into which the Ultimate Fighting Championship has morphed. Without the structure that a season and postseason provides and absent any regular major events to look forward to like tennis, the relentless march of meaningless fight cards can at times feel like Penrose steps as a stairmaster; we move forward through the calendar but are perpetually looking out toward the next platform, and damn does it get exhausting to keep up with…” A Blueprint to Unionize

“I know it may be hard to believe, but the biggest story in the MMA world had little — though not nothing — to do with UFC Fight Night 125 on Saturday in Belem, Brazil. It sounds strange, since apparently the event was important enough to justify a 15-hour run time, or at least that’s how it felt. However, as good as it felt to see Lyoto Machida snap a three-fight losing streak in front of a supportive crowd of countrymen, a more pressing development was going on behind the scenes.

It was announced that heavyweight champion Stipe Miocic will fight light heavyweight titleholder Daniel Cormier in the UFC 226 headliner in July. That alone is big news. This is the first champion-versus-champion match in Ultimate Fighting Championship history to take place above welterweight, and it’s a genuinely compelling clash on its own. Cormier was undefeated at heavyweight for four years and 13 fights, and he didn’t just beat scrubs. Former UFC champions and title contenders like Frank Mir, Josh Barnett, Antonio Silva and Jeff Monson decorate his heavyweight ledger, and eight of his 13 wins resulted in stoppages. Cormier was a legitimate heavyweight talent despite being small enough to compete at light heavyweight. Now that Miocic is short on viable contenders, this is one of the best matchups on the UFC roster for the heavyweight champion.

Yet it isn’t just the matchup itself that is noteworthy. How the fight materialized is just as significant and potentially much more so depending on how the future shakes out…” 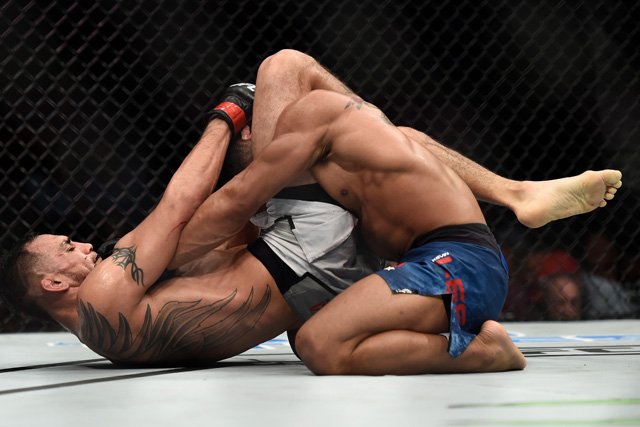 A Source of Pride

“There is a story behind every journey into the Octagon, and every story invariably includes adversity and heartache — almost certainly to a much greater degree than triumph. Success is built on a mountain of Ls, and in order to suffer through those losses and keep trudging onward, there must be an aquifer of personal pride somewhere beneath the bedrock of whatever other motivation propels fighters forward. Though nebulous and amorphous, pride is an essential piece of the fight game. There was no shortage of it at UFC 216 on Saturday in Las Vegas, especially at the top of the card…”